More Australians boost their income through the sharing economy 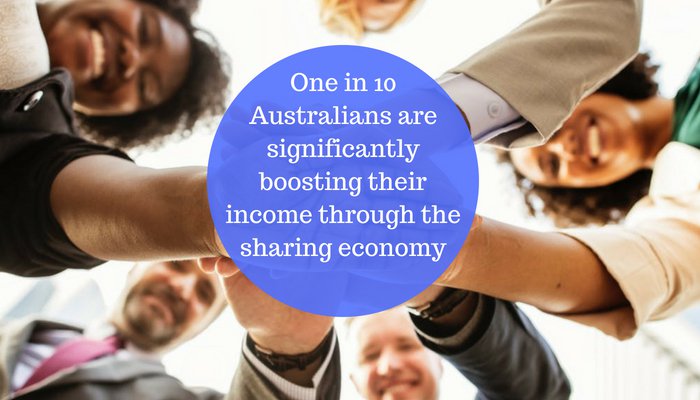 More Australians boost their income through the sharing economy

One in 10 Australians are supplementing their income.

Erika Munoz and Lucerito Farrell from Sydney's Rozelle are among the millions of Australians turning to the sharing economy to earn extra income.

The half-sisters have a pet-sitting business, Petsisttars that is bringing in about $1200 a month. Munoz, 32, works full-time in software sales, while Farrell, 23, is a student.

It's a way of combining their love of all creatures great and small with earning money. The sisters have looked after everything from dogs and cats to lorikeets and rabbits in their own home or as part of housesitting.

"We had two dogs and a cat back home at home in Colombia and we miss them a lot and pet sitting is a good way to have pets around," Munoz says. "Now we get to mind pets of different shapes and sizes and they fill our hearts with lots of happiness."

Their services and those of other sitters are offered through online marketplace, Mad Paws, which matches them with pet owners who need a hand.

The sisters have been using the site since halfway through last year and have managed to make enough money to take themselves and their mother on holiday to the Philippines.

One in 10 Australians are significantly boosting their income through the sharing economy by supplying services, according to estimates by the Sharing Hub.

Many are able to earn $1,100 a month, on average, working just five hours a week, providing handy extra cash to help pay bills, pay-off debts and even paying off the mortgage.

Almost half are also using the sharing economy several times a month as customers, with affordability cited as the number one reason, while one in four believe they receive a better service.

This year, comparison site Finder released the results of a survey of more than 2,000 people, showing that it is possible for them to make up to almost $20,000 year by making money from their spare time and from unused physical assets.

Finder estimated that one in five Australian adults are turning to the sharing economy for at least some additional income, with the average income from sharing platforms of about $7,300 a year from these side jobs.

"The Finder survey suggests the most lucrative way to earn money on the side is as an Uber driver – with drivers, on average, earning $10,490 a year from the ride-sharing service."

The Finder survey suggests the most lucrative way to earn money on the side is as an Uber driver – with drivers, on average, earning $10,490 a year from the ride-sharing service.

Renting out a spare room on online platforms, such as Airbnb, is earning property owners $8,140 on average.

People working full-time jobs are also most likely to be making extra cash in the shared economy.

“How much you make is dependent on how hard you work, but the research shows it can be very profitable,” she says.

“The sharing economy has taken-off in Australia and it’s seen as a legitimate way to boost income. It may not make you rich, but it could be enough to pay for an extra holiday or boost your savings account."

The survey found about 17 per cent of adults report renting out a property or a spare bedroom, 7 per cent say they have driven an Uber, and 6 per cent report freelancing or running errands and getting paid for it.

“It’s expected that this number will skyrocket as households look for creative ways to shield themselves from rising living costs,” Hassan says.

While Airbnb and Uber are the most well-known global sharing economy brands, Australia has its own successful home-grown platforms such as Airtasker, a hiring marketplace to find someone to perform tasks from assembling furniture to data entry, Zoom2u, for the transport of packages and parcels, and Spacer, where you can share your spare garage or attic space.

Mike Rosenbaum, the co-founder of Spacer and one of the founders of The Sharing Hub, which mentors about 25 Australian sharing economy businesses and is an investor in some of them, says one of the advantages of the platforms is that users don’t have to be business savvy as the platforms provide the bookings.

"These platforms give you a marketplace so that you can work for yourself with flexible working hours," Rosenbaum says. "The users of the platforms just have to have an appetite to earn a bit of extra income."

It is important to remember that money made through the sharing economy is taxable income, just like any other form of income.

The Tax Office is using enhanced data matching protocols for the sharing and online economy, which is making it harder for taxpayers to hide income.

If you do only use online marketplaces like eBay to, say, sell household goods or possessions that you don't want anymore, you are not carrying on a business and do not have to declare the income.

But Uber drivers, for example, are treated no differently to taxi drivers as far as the tax law goes.

The Tax Office has repeatedly warned income from renting out a car space or attic needs to be declared.

Prev
What's next for Brexit
Next