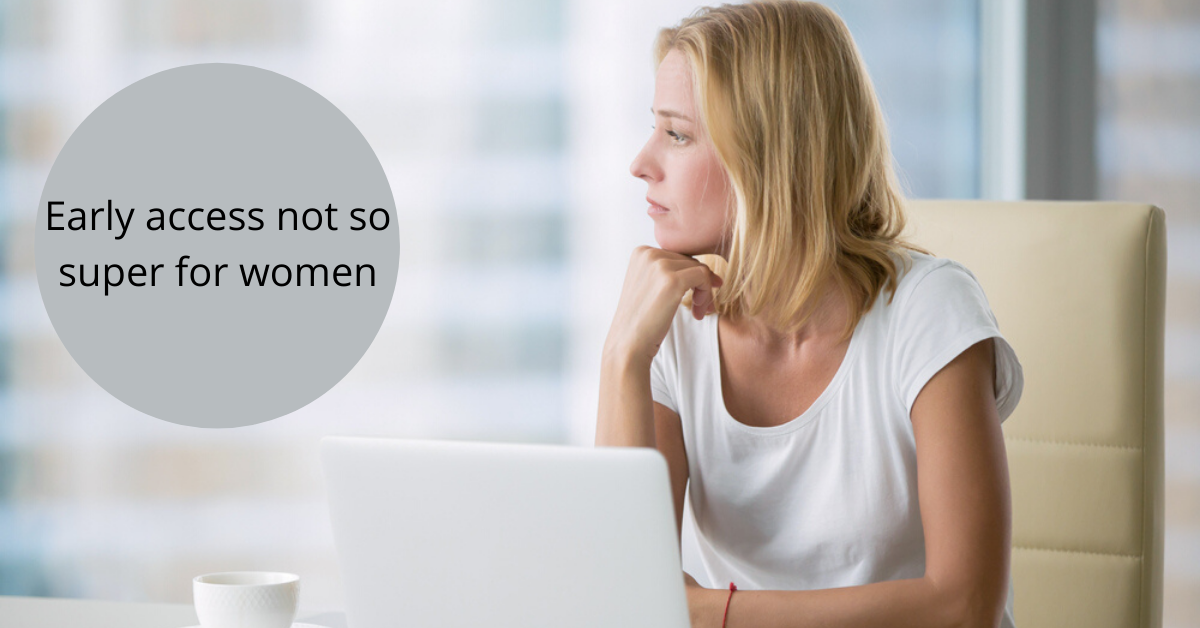 Recent figures from the Australian Bureau of Statistics (ABS), found the average superannuation balance for women aged 25 to 34 was $33,200, aged 35 to 44 is $69,300, and aged 45 to 54 estimated at $129,100. A withdrawal of $20,000 could potentially mean a reduction from $33,200 to $13,200, which is a 60% reduction in her superannuation balance. Given that women retire with an average of 40 per cent less superannuation then men, this withdrawal leaves a sinkhole in her retirement savings and further widens the gap.

You may be thinking, ‘I’ll play catch up and make up the amount down the track’. We recognize that for some, covering the rent or loan repayments now takes priority over their future retirement. However, to recoup the equivalent of $10,000 back into superannuation requires an annual salary of $123,839 paying 9.5 per cent per annum in superannuation guarantee contributions. According to the ABS, the average weekly earnings for a female is $1,508.50 (or $78,442 per annum), which falls short of the six figure income required to replenish the shortfall.

"According to the ABS, the average weekly earnings for a female is $1,508.50 (or $78,442 per annum), which falls short of the six figure income required to replenish the shortfall."

Perhaps the thought of working extra hours has crossed your mind. Here is a sobering thought. A report from the Association of Superannuation Funds of Australia (ASFA) on Women’s Economic Security in Retirement found that women are more likely than men to be working longer in a part-time capacity. This figure rises to 61% for women who care for family, stay-at-home mums, take a career break to study or are unable to find suitable full-time employment. The report goes on to say that the broken working patterns adversely affect a woman’s security in retirement.

Chances are, your super is invested in a ‘balanced’ option. The average balanced portfolio has lost 10-12 per cent in the last month, underpinned by sharp falls in equity markets. A withdrawal now could potentially mean that you are withdrawing an amount of $20,000 that would otherwise be valued at $22,727, crystalizing a loss of $2,727, that should have been working for you within your superannuation.

5. Loss of insurance cover
A sizeable withdrawal of $20,000 from your super, combined with regular fund fees and insurance premiums, added to a break in working patterns, could push your account balance below $6,000, leaving you vulnerable to automatic cancellation of insurances within super. According to a report by Lifewise, with 95 per cent of Australians underinsured, you’d want to be sure to hang on to this valuable safety net.

Take stock of how much conveniences are costing you

Prev
Get on top of your finances post COVID-19
Next